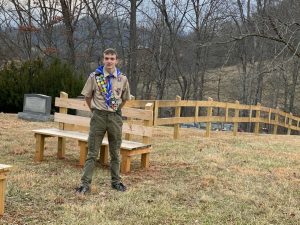 Midway’s very own Nicholas Sawyer has been awarded the Boy Scouts highest rank achievement, the Eagle Scout badge. During Nicholas’s 11 years with Boy Scouts of America, he has earned 38 merit badges, of which only 21 are required for the Eagle Scout rank.
Nicholas invested more than 140 hours in his Eagle Scout Service Project. He planned, fundraised, and recruited volunteers to help install 175-foot board fence with benches at Parker’s Chapel Cemetery in Crabtree. He completed this project in May of 2019 alongside family, friends, and fellow scouts.
During Midway’s remodel, Nicholas has assisted his dad George in several construction projects when he has time off from school and he is also Midway’s landscaper.
Nicholas exemplifies what it means to be an Eagle Scout through his service, commitment, leadership, and duty to God. He plans to use his training and influence to serve his Country by joining the Navy after he graduates from high school this June. Nicholas is the son of George and Julie Sawyer.